The one who is needed It’s early morning and Funeka’s halfway through her first cup of tea when the phone starts ringing. A radio station wants to talk to her about the work she does with Operation Smile. After the 30-minute call, she slips out of her fluffy slippers and into her trademark yellow hat to begin a day of advocacy, rural village visits and ultimately life-changing conversations and interventions.

The name Funeka Cele is one that is heard often in the Operation Smile South Africa office. Whether it’s, “Ask Funeka, she can help,” or, “Funeka helped me reach this patient,” her name is synonymous with assistance to Operation Smile.

We have planned to meet a group of former and current patients whose lives Funeka has impacted. When we arrive at St. Patrick’s Hospital, there are already people waiting for us. As we enter the hospital where she once worked as a nurse, it’s quickly apparent that Funeka remains a figure of much admiration and affection even after five years of retirement.

While everyone settles into their seats, I watch the patients interact with Funeka. The barriers that exist between the caregiver and her patients seem to drift away like the soil that blows across Funeka’s feet as she hikes across another dirt path to visit a child that may need her help.

Patients and their guardians have come from around the Eastern Cape to share their stories of how Funeka touched their lives. One mother and daughter made a round trip of more than 500 kilometers just to pay their respects. Each story has its own unique elements, but the common thread is the woman at the center of it.

“If you wake me at 3 a.m., I will say I know Sister Funeka. She is somebody who loves people and has got love. She is doing this [advocacy] because of love,” says Samkelise, who traveled over an hour on unpaved roads to bring her 12-year-old nephew Unathi to see Funeka.

Unathi is a shy boy who’s still developing his own voice a year after Funeka helped deliver him to the Operation Smile medical mission where he received cleft palate surgery. Before the surgery, he found it hard to speak in class and his teachers wanted to transfer him to a school focused on a special education curriculum, mistaking his reluctance to participate with a learning disability. Since the surgery, he has been able to participate more fully in school and life — it’s in a braver, more confident voice that Unathi tells Funeka that there are neighbors in his district who may also have cleft palate.

This is what Funeka does — she inspires others to become advocates. Not by words or rewards, but by her simple example of care. Immediately, she agrees that these children must be visited and assessed. She agrees to meet Unathi at his family’s home the very next day.

During the two-hour drive from Bizana, down the dusty, rugged dirt roads that criss-cross this impoverished countryside, we stop several times as Funeka recognizes a home or former patient. Sometimes it’s a family whose children she helped deliver at birth. Another instance, it’s an elderly couple striving to repair the roof of their home. She doesn’t wear her heart on her sleeve so much as she wields it like an instrument of change.

A nurse for more than 30 years, this no-nonsense lady first came into contact with Operation Smile in 2008 when she was approached by a visiting Operation Smile non-medical volunteer conducting a cross-country awareness campaign.

“I was still really young and a bit nervous, but Funeka embraced me and the organization and basically took me in,” says Tamlin Abrahams, now the Regional Director for Central, Southern and West Africa at Operation Smile South Africa.

It was not long before Funeka began to thrive in her role as a medical volunteer and patient advocate with Operation Smile. With her first passport in hand, she went on to attend medical missions in Rwanda, Madagascar and Malawi, serving primarily as a night nurse.

“They were very different, especially Madagascar, because everything there is unlike South Africa. On these medical missions, I learn from working with the other nurses and also teaching.” Funeka says.

Funeka is on her phone with yet another potential patient when Unathi appears along the roadside. He slips into the back seat and huskily directs us a few more kilometers down the road where we park the car. We follow the intrepid duo of Funeka and Unathi into a family kraal, a gathering of traditional African huts. Introductions are made, and a chair is brought into the courtyard. It’s there that the nurse assumes her former professional role and begins assessing the health of the two children Unathi identified.

The children do not have cleft palate as first suspected, but appear to suffer from hearing loss and are unable to speak. However, Funeka is undaunted and explains to the children’s grandmother and guardian that while she cannot immediately assist them, she will direct them toward help. Calls are made, numbers exchanged, photos taken and it’s with a sense of purpose we leave this place.

Funeka wants to visit Babalo and Pindeka. There are no ifs, buts or maybes. Babalo is 3 years old and received his cleft lip surgery from Operation Smile in 2014. Funeka is planning on bringing him to the South Africa medical mission in 2016 so he can receive surgery to repair his cleft palate and complete his transformation.

Babalo and Pindeka live between two hills and, after negotiating a tricky single track path, we arrive at their home. Pindeka, Babalo’s mother, lives here raising her son and seven siblings after her parents passed away from tuberculosis.

When Babalo was born in 2013, the nurses immediately contacted Funeka. It was just one year later that he received his surgery.

“I am always so happy to see Funeka coming to see us — she is different. She is somebody who genuinely loves and cares for people,” Pindeka says.

Pindeka is the sole breadwinner in her family and relies on government grants to feed and care for them. Funeka has plans to change this and is already pursuing the idea of Pindeka returning to school and working to become a nurse. For Funeka, this is not a job — it doesn’t end at the post-operative ward. Each patient and their families become her family and she treats them as such.

It’s dark as the car stops outside Funeka’s home, but the light of her mobile phone sends out its own morse code as it flashes every time a text message comes through. A worried mother has heard Funeka’s radio interview and raised enough money to send a text asking for help. The desperation is palpable even in the shortened format. Help is needed, but Funeka is there.

“He will be fine,” she writes.

As she exits the car and heads into her home I can’t help but wonder out loud what the name Funeka means.

She smiles and says, “The one who is needed.” 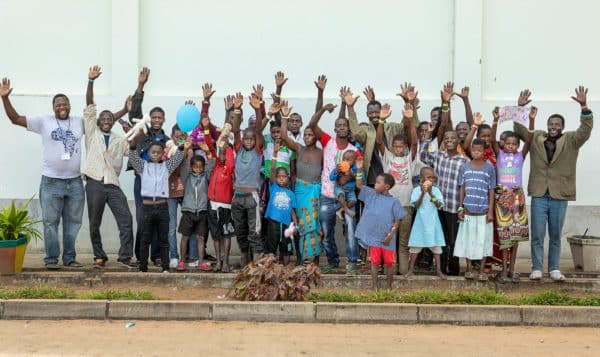